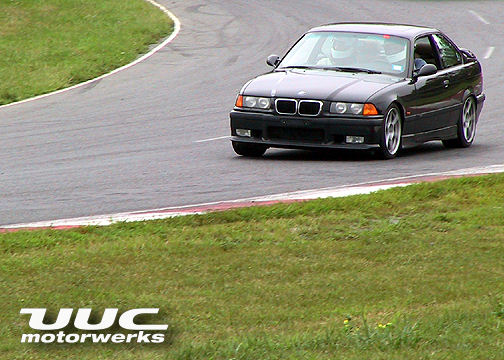 Starting in 1996, BMW fitted a 6-speed gearbox to the E36 M3 Evolution, the standard version of the M3 sold in all markets except the USA.  The American market cars were always unique to the US, de-contented and mechanically different in order to keep a lower price.  Principally, the US-market car differed from the Euro version in the motor (Euro 321bhp, multi throttle S50B32 engine, US 240hp, single throttle S52 engine) and in the absence of one gear.

The 6th gear in the Evolution M3 was simply an overdrive, the first five gears were the same ratios.  It could be said that the between the Autobahn and Autostrada, higher average cruising speeds made the overdrive a luxury that could be trimmed from the cars sold in the USA with our slower Interstate highways.

But having an overdrive is not the only reason to add more gears; by adjusting the final drive gearing, one can achieve the effect of a close-ratio gearbox and also have greater torque multiplication without a sacrifice in top-gear cruising... and even retain a taller top gear, getting "the best of both worlds" with deeper gearing and lower rpm at highway cruising speed.

Let's examine what changing the ratios does:

As we can see in comparison to the 5-speed gearing, both the 3.46 and 3.64 final drive change works out nicely for increasing torque multiplication while still maintaining 6th gear as an overdrive taller than the original 5-speed/3.23 combination.  BMW apparently felt the lower final drive gearing to be of a worthwhile benefit in the E46 M3, which shares the same transmission ratios and tire diameter (tire diameter affects complete overall gearing).  The early E46 M3 was fitted with the 3.64, later ones changed to an effectively indistinguishable 3.62.

Installing the Evolution M3 6-speed gearbox into a US 5-speed M3 is a direct parts swap; transmission, shifter assembly, driveshaft, and a differential flange change are all that are needed.  What prevents more US E36 M3 owners from installing the 6-speed gearbox?  Cost is a factor; figure approximately $7000 in parts brand-new from BMW.  Used parts are definitely a viable option at a lower cost, but parts must be imported from overseas which can be considered a difficult and more expensive proposition, not to mention little resource should the parts prove to be defective.

However, with the US-market E46 M3 available now for around five years, many dismantled examples are available for parts-picking right here in the USA.  The cost of a used E46 M3 gearbox is certainly reasonable and the possibility of finding one locally (with a warranty) is attractive to American enthusiasts.

The E46 M3 6-speed gearbox is literally a "bolt in" for the E36 as the engine mounting points are shared, both the E36 S52 motor (and all other previous M50 iterations) and the E46 M3 S54 are identical in that respect.  With the exception of the driveshaft, all other conversion parts are available directly from BMW and/or quality aftermarket sources such as UUC Motorwerks.